Si-Hu-Ha-Ta sitting on gold nuggets and feeding on charcoal. This means that the owner will always be blessed with wealth, gold, fortune and material comforts. Si-Hu-Ha-Ta is one of the most legendary "Thep" that Thai people still worships for fast wealth and windfall because Si-Hu-Ha-Ta is easily satisfied when one offers black charcoal and has no limit to how much wealth he can bless someone with because Si-Hu-Ha-Ta was in fact a form of Phra Indra, the king of Devas. That pretty much explains everything about this amulet.

According to legend, Lord Indra wanted to test a poor but hardworking farmer by turning up in a form of a monster with 4 Ears 5 Eyes then destroying the farmer's plantation. The farmer became furious and manage to capture Si-Hu-Ha-Ta and tied it around a pole. One night while serving dinner, the farmer noticed Si-Hu-Ha-Ta was hungry. Being a poor farmer who have nothing else to offer the starving monster, he sincerely offered black charcoal. Impressed by the farmer's compassion, Si-Hu-Ha-Ta started eating the charcoal and shit gold nuggets. Surprised by whats happening, the farmer continued to feed black charcoal while Si-Hu-Ha-Ta continue producing gold nuggets, the farmer then became very wealthy.

Till today, Si-Hu-Ha-Ta is still widely worshiped in Thailand and is one of the main icon for money luck. There are many masters and monks who consecrates Si-Hu-Ha-Ta amulets in Thailand. 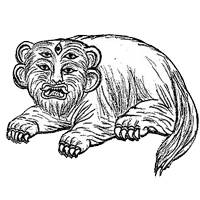 Si-Hu-Ha-Ta’s four ears represent the four Buddhist dharma practices of metta (loving kindness), karuna (compassion and generosity), mudita (empathetic joy for others’ success and good fortune) and upekha (equanimity). The meaning is pretty clear: If we listen to others with these perspectives, our communication with them will be peaceful. Our minds will be capable of greater empathy and understanding.

Si-Hu-Ha-Ta’s five eyes represent the five precepts of Buddhist dharma: to refrain from killing, stealing and lying; from indulgence in adultery and other sexual behavior that harms others; and from alcohol or other intoxicants. Again, the meaning is clear: Following the precepts helps us develop greater insight and wisdom, and to treat others with compassion. 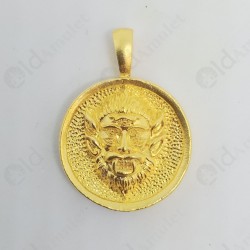 Thai Amulet 4ears5eyes Gambling Wealthy Coin Gold +Violet Kb Subin 2561
..
USD $34.99
Add to Cart
Add to Wish List Compare this Product
Buy Now Chat with us
Showing 1 to 12 of 25 (3 Pages)
COVID-19 NOTICE
Order may delay some country. However, We will do everything the best way to delivery all amulets to you. God Bless you & Thank you for your support.